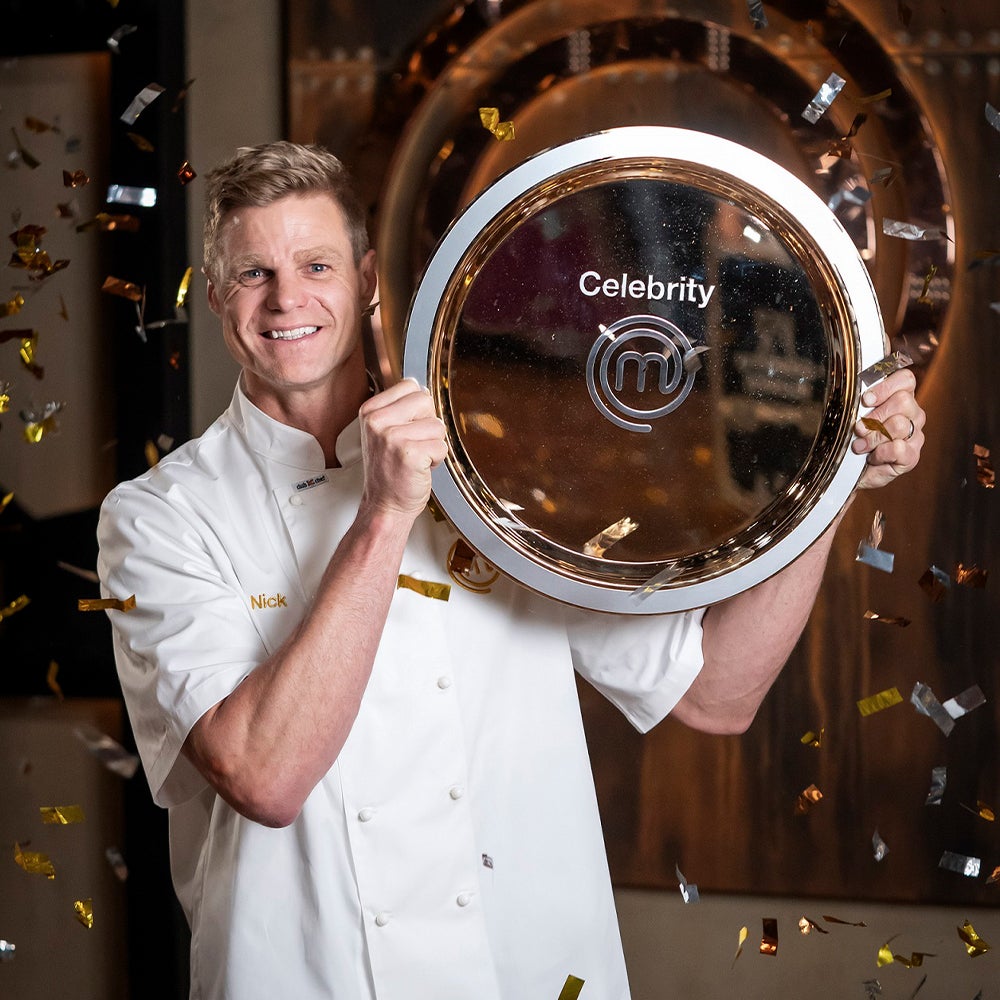 A decorated champion on the football field, Nick Riewoldt has proven that he has the recipe for success in a different high-pressure arena, claiming victory and the title of Celebrity MasterChef Australia.

Collette Dinnigan, Nick Riewoldt and Tilly Ramsay entered the MasterChef Kitchen for the grand finale, applauded by the judges and the eliminated celebrities watching from the gantry. The judges reminded Collette, Nick and Tilly that they were playing for the title, the trophy and $100,000 for their chosen charity.

Tilly revealed that she was playing for Great Ormond Street Charity, Collette was aiming to win for Hope Delivery Foundation, while Nick wanted to take home the top prize for Maddie Riewoldt’s Vision.

Jock revealed that the challenge was going to be set by a chef at the height of his culinary powers. Martin Benn arrived to present the first Pressure Test of the season, and revealed his Metropolis dessert, telling the celebrities that the difficulty was 20 out of 10.The celebrities had four hours to cook the Metropolis, and the judges and Martin would taste and score each dish out of 10.

Tilly was up first to present her Metropolis, and Jock marvelled at her work. While Tilly hadn’t nailed the corners of her chocolate top, Melissa said her gel and coconut Chantilly were wonderful, and Andy was impressed at what she had plated up at just 19 years of age.

Collette knew that one of the layers in her dessert was doubled and hoped the subsequent balance of flavours worked. As Martin sliced through the Metropolis, it became clear that Collette had unknowingly plated her dish upside down. The judges and Martin commended much of Collette’s work, but the additional layer of cherry had dulled the chocolate flavour.

Nick was last to present his dish and admitted that the cook had been a complete rollercoaster. Martin said the level of shine and temper on Nick’s chocolate was perfect, his mousse was beautifully soft, and balance wise his dish had everything the judges were looking for. Jock said he was amazed at how perfect the dish was, admitting it was 99% there.

It was time to reveal the scores and Collette received eights from Martin and Jock, and sevens from Melissa and Andy, giving her a total score of 30/40. Tilly was awarded eights from Andy and Melissa, and nine from Martin and Jock, giving her a total score of 34/40. It was down to Nick, and he received nines from Andy and Melissa, and after Martin said he enjoyed Nick’s dish as much as his own, a resounding ten from both him and Jock, landing Nick in first place with a mammoth 38/40.

Nick Riewoldt was crowned the winner of Celebrity MasterChef Australia, and he was thrilled and emotional to be taking home the trophy, title, and $100,000 for Maddie Riewoldt’s Vision.

Upon winning Celebrity MasterChef Australia, Nick Riewoldt said: “It’s amazing, I am overwhelmed. This has been one of the best things I’ve done, and one of the best experiences I have had.

“There is an emotional element in terms of the charity that I’m playing for and this will make a tangible difference to people’s lives.

“I finally get to lift some silverware, that’s been a missing chapter. I’ve been a part of teams for a long time, and this is one of the great teams that I’ve felt privileged to be part of.”

Catch Up On 10 Play On Demand.