2021 MTV EMAs Celebrates Music For All Around The World.

2021 MTV EMAs Celebrates Music For All Around The World. 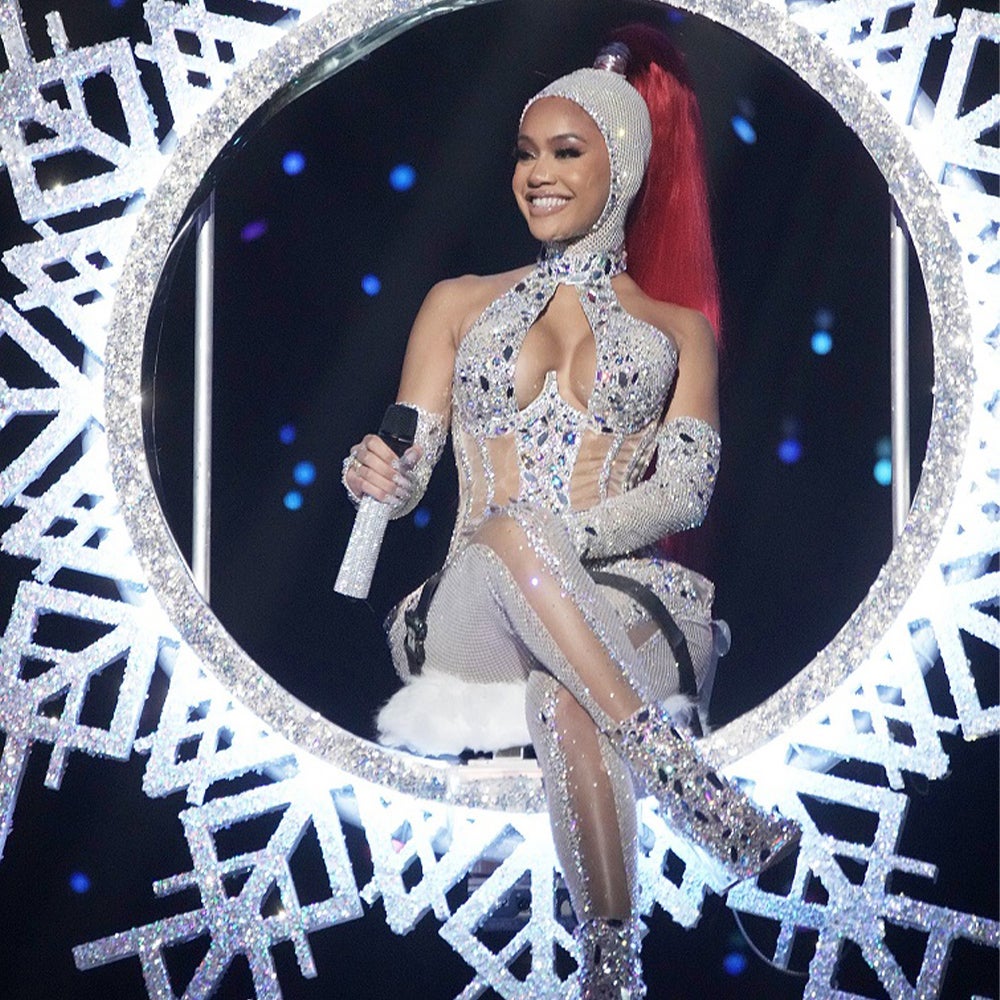 The 2021 MTV EMAs returned live from the Papp László Budapest Sportaréna in Hungary with a global celebration of music for all.  The epic event, which aired on MTV in 180 countries, featured electrifying performances from today’s hottest stars and honoured some of the world’s biggest artists while also celebrating music, love and equality.

The “Best Collaboration” award went to Doja Cat ft. SZA for “Kiss Me More,” while David Guetta nabbed “Best Electronic,” and Billie Eilish was honored with “Video for Good.”

Deriving inspiration from the host city’s popular thermal spas and the Danube River, which runs through Budapest, the show was surrounded by water with stages that appeared to be floating.

“Best New” award recipient and EMA host Saweetie brought the fashion and the funny with unforgettable show moments including basking by a pool with champagne in a palm tree-lined oasis, interacting with Squid Games-inspired soldiers in hot pink suits and MTV-branded masks, chatting virtually with friend and Brazilian singer Anitta, and riding a skateboard. Descending from the sky in a glittery snowflake, she also performed a medley of her hits “Best Friend,” “Tap In” and “OUT OUT.”

Global Latin superstar Maluma and “Best Latin” winner brought the heat for the world premiere performance of his new single “MAMA TETEMA.” Tanzanian singer Rayvanny and a team of dancers joined him on stage for the high-energy performance set in a club and featuring rain.

Imagine Dragons returned to the EMAs for the debut of their new single “Enemy.” Immersed in a flood of laser lights, the best-selling rock band rocked the stage alongside Grammy-nominated rapper and artist J.I.D and a squad of dancers.

With a giant “MAMMAMIA” sign shooting off pyrotechnics, first-time EMA performers and “Best Rock” winners Måneskin lit up the stage with a rousing rendition of their hit single “MAMMAMIA.” The Italian rock band was donned in black and gold with lead singer Damiano David sporting a glittery pair of leather briefs.

Kim Petras made her EMAs debut and EMAs history as the first trans artist to perform at the show. With a giant coconut on the stage and clad in a green latex dress with a black bodysuit underneath, the international pop star brought the sexy and the camp with a medley of two new unreleased songs, “Coconuts,” and “Hit It From The Back.”

British rising star Griff made her EMA debut performing “One Night” with a shadow dancer and dancer dressed in a mirror ensemble.

Norwegian, indie pop musician, and MTV PUSH artist, girl in red made her EMA debut performing her hit single “Serotonin” from her internationally charting debut album, if i could make it go quiet. Initially performing inside a grey house, the beanie-wearing artist went out to get closer to the crowd before the house lifted into the air off the stage.

World Stage headliners OneRepublic performed a lively rendition of their single “Run” in front of a sold-out crowd at Heroes Square in Budapest complete with a fireworks finale.

Multi-instrumentalist, singer, songwriter, and “Best Alternative” award winner YUNGBLUD closed the night with a high-octane, pyrotechnics-filled performance of his latest single “fleabag.” During the electrifying show, people fell from the sky, and the stage was trashed by the performer who at one point kissed his bass player.

For the first time, the “MTV EMA Generation Change Award” winners were recognized during the EMAs main show. This year’s honorees are five young changemakers who are furthering equality and love while fighting against anti-LGBTQ+ policies.

Actress and talk show host Drew Barrymore honoured the recipients via a taped piece where she spoke about equality.  The winners are Amir Ashour (Iraq), founder and chair of the board of IraQueer; Matthew Blaise (Nigeria) a non-binary and openly gay activist and founder of The Oasis Project, which supports queer people in Nigeria; Sage Dolan-Sandrino (United States) an Afro-Cuban queer and trans woman and the founder of a creative studio and digital magazine, the TEAM Mag; Erika Hilton (Brazil) the first Black trans woman ever elected in São Paulo, Brazil, and Viktória Radványi (Hungary) a board member of Budapest Pride, Hungary’s first feminist and anti-racist LGBTQ+ NGO, who appeared on stage to accept the award on behalf of the winners, creating a powerful moment of solidarity with the global LGBTQ+ community.

The “MTV EMA Generation Change Award” is a part of an expanded partnership between MTV Entertainment (MTVE), a division of ViacomCBS, and All Out, the leading global LGBTQ+ advocacy group, and part of ViacomCBS’ Content for Change initiative.

Additionally, MTV celebrated all the local EMA winners from different regions around the globe with Ruel taking home the Best Local Act award for Australia and Teeks for New Zealand.