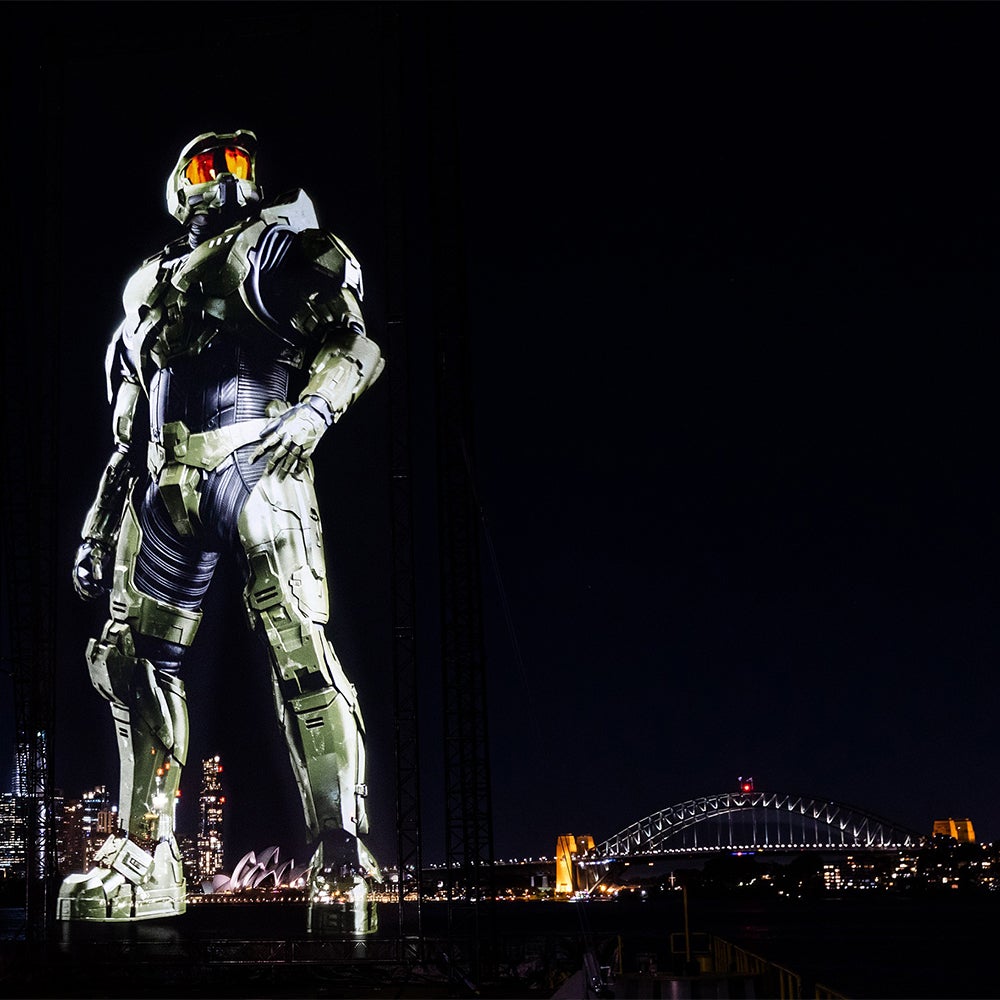 Hologram Projection Of The Master Chief: Spartan 117 Across Multiple Countries.

Paramount+, the global streaming service from Paramount Global, announced a multi-market partnership with Minute Media, Wavemaker and Kaleida to bring to life its latest brand campaign celebrating the hit series HALO. The projection is the latest in a series of global campaigns focused on the Paramount+ hit series, HALO, which is based on the iconic Xbox franchise and has broken a new record as the service’s most-watched series premiere of all-time internationally.

The partnership culminated with a giant 60 feet tall 3D hologram of HALO’s iconic Master Chief: Spartan 117. The 3D hologram was installed at world famous locations in Toronto, Mexico City, Sao Paulo and Sydney Harbour exclusively for one day on April 17, bringing everyone’s favourite Spartan to life, for HALO fans around the world.

The Master Chief hologram was produced for Paramount+ by Minute Media, a global technology and content publisher, in partnership with hologram specialists, Kaleida, and media agency, Wavemaker.

The record-breaking hologram, dubbed the ‘HALOgram’, scaled the equivalent height of a six-story building and featured a custom 3D animation that saw the Master Chief land on Earth and assess the local surroundings. Each installation weighed over 24 tons and was built using over 100m of metal trussing to house 126 square meters of specialist hologram gauze.

“HALO has delivered a tremendous response among fans around the world as Paramount+’s most-watched series premiere of all-time globally. We are proud to continue the momentum around the series by bringing HALO to life for fans in Australia, Latin America and Canada, in an epic and innovative way that only Paramount+ could achieve. This is a celebration to the fans and to this iconic franchise that continues to entertain people around the globe,” said Marco Nobili, Senior Vice President of Streaming Marketing, Data and Analytics, Paramount.

“Minute Media is thrilled to have been an integral part of bringing this innovative and ambitious project to life. Our priority is to empower partner brands, global publishers and content creators through innovation and video amplification. We are always looking to push boundaries with our partners and the HALOgram was a perfect opportunity to realise that vision on a global scale,” said Ed Bovingdon, Entertainment Partnerships at Minute Media.

“We’re excited to have been part of the creative concept and strategy for this pioneering project. At Wavemaker, we’re constantly looking to break new ground and reshape consumer experiences. By combining innovative ideas underpinned by our strategic media approach we’ve brought an epic moment to life for fans to enjoy worldwide,” said Sophie Finckenberg, Digital Director, Wavemaker.

“Kaleida is all about world firsts and creating works on a scale that have never before been attempted. The four largest outdoor holograms in the world, in a 24 hour period, is a challenge we were excited and honoured to be invited to take on,” said Kaleida co-founder Daniel Reynolds.

Paramount+ premiered the long-awaited series HALO on March 24, becoming the most-watched series on the platform in its first 24 hours.

In its adaptation for Paramount+, HALO takes place in the universe that first debuted in 2001 with the launch of Xbox®’s first Halo game. Dramatising an epic 26th-century conflict between humanity and an alien threat known as the Covenant, HALO the series weaves deeply drawn personal stories with action, adventure and a richly imagined vision of the future.

Halo reinvented how people think about video games and has grown into a global entertainment phenomenon, having sold more than 82 million copies worldwide and grossing more than $6 billion in lifetime total sales revenue.

HALO is produced by SHOWTIME® in association with 343 Industries, along with Amblin Television. The first season of HALO is executive produced by Steven Kane, alongside Steven Spielberg, Darryl Frank and Justin Falvey for Amblin Television in partnership with 343 Industries, Otto Bathurst and Toby Leslie for One Big Picture, and Kyle Killen and Scott Pennington for Chapter Eleven. Kiki Wolfkill, Frank O’Connor and Bonnie Ross serve as executive producers for 343 Industries. The series is distributed internationally by Paramount Global Distribution Group.

HALO will return for Season 2.

For images and videos of the record-breaking HALOgram, please click here.

Paramount+ is a global digital subscription video streaming service from Paramount that features a mountain of premium entertainment for audiences of all ages. Internationally, the streaming service features an expansive library of original series, hit shows and popular movies across every genre from world-renowned brands and production studios, including SHOWTIME®, BET, CBS, Comedy Central, MTV, Nickelodeon, Paramount Pictures and the Smithsonian Channel™, in addition to a robust offering of premier local content. The service is currently live in the U.S., Canada, Latin America, the Nordics, and Australia, and will be live in 48 markets by the end of 2022.

Minute Media is a leading technology and digital content company. Our proprietary video and multimedia publishing platform, Voltax, powers the creation, distribution, consumption and monetization of third party publishers and advertisers as well as our own sports and culture content brands, including The Players’ Tribune, FanSided, 90min, DBLTAP, Mental Floss and The Big Lead. As of September 2021, the company is ranked as a top three property within U.S. sports video unique viewership and U.S. sports reach according to Comscore. For more information, visit www.MinuteMedia.com.

Amblin Television, a long-time leader in quality programming, is a division of Amblin Partners, a content creation company led by Steven Spielberg. Amblin Television’s Presidents, Darryl Frank and Justin Falvey, oversee all development, production and programming for the company. Amblin Television currently has twelve projects in various stages of production and release including season two of “Resident Alien” for SYFY, “Halo” and “Fatal Attraction” for Paramount+, “Billy the Kid” for Epix, “Masters of the Air” for Apple, a third season of “Animaniacs” for Hulu, season four of “Roswell, New Mexico” for The CW, two seasons of “Gremlins: Secrets of the Mogwai” for HBO Max, two seasons of “Tiny Toons Looniversity” for HBO Max and Cartoon Network, and documentaries “Big Vape” for Netflix, “Good Night Oppy” for Amazon Prime Video, and “Mama’s Boy” an adaptation of Oscar-winner Dustin Lance Black’s autobiography.

Amblin Television also produced the Emmy, Golden Globe and Peabody Award-winning drama “The Americans” for FX, the Golden Globe-nominated and double Emmy Award-winning mini-series “Into the West” for TNT, Emmy-winning documentary series “Why We Hate” for Discovery, the Emmy-nominated HBO movie “All The Way” starring Bryan Cranston, “Smash” for NBC, “Under the Dome” for CBS, “Falling Skies” for TNT, “The Borgias,” “The United States of Tara” for Showtime, and “Las Vegas” for NBC. For more information, go to www.amblin.com.

343 Industries is the developer of the blockbuster Halo series of video games and, as part of Xbox Game Studios, oversees the Halo franchise including games, original programming, novels, comics, licensed collectibles, apparel and more. “Halo Infinite,” the studio’s most recent game release, has achieved critical success, receiving over 60 industry awards and is the most successful game release in Halo franchise history.

We believe there always is a better way to grow. We positively provoke growth for our clients by reshaping consumer decision-making and experiences through media, content and technology. The Wavemaker way is globally consistent. Fuelled by the world’s most powerful consumer data, we understand where and how marketing can intervene decisively to help brands win more sales. Our 7,000 people across 88 markets have the deep knowledge, confidence and courage to provoke growth for some of the world’s leading brands and businesses.

We are a part of GroupM, WPP’s global media investment management company. Discover more on wavemakerglobal.com, Twitter and LinkedIn.

Kaleida is an award-winning technology company most renowned for its world leading holographic projections, synthetic reality video content and digital humans. It is also a full-service event production house. Among its string of world firsts are the world’s most watched hologram event, with 100 million views, and the world’s most viewed digital resurrection. Production houses, pop stars, governments and major events around the globe trust us to blend the real-world environment with digitally created content to create unforgettable visual experiences. We are all about creating the impossible. For more information, please visit www.wearekaleida.com.